Murder at the Lake 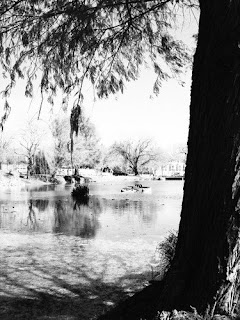 A terrible thing to happen at any time of the year.

Detectives investigate Canyon Lake homicide
By Scott Sticker
Detectives from the Comal County Sheriff’s Office announced Tuesday that they have arrested a Canyon Lake man in the shooting death of his father.At about 1:45 p.m. Monday, a 911 call for a possible suicide came from Jordan William Weber, 25, to the Sheriff’s Office from his father’s residence in the 1400 block of Hillcrest Forest in Canyon Lake, according to the Sheriff’s Office. He told the 911 operator he found his 55-year-old father, Ron Weber, shot in the house, sheriff’s spokesman Lt. Mark Reynolds said Tuesday.

When deputies arrived on the scene, Reynolds said they found Ron Weber dead and alone with a gunshot wound to his head.Detectives were called in and found questionable evidence, which officials declined to release Tuesday, that led them to believe it was not a suicide, Reynolds said. They then obtained a search warrant and searched the crime scene, Reynolds said.

Sheriff’s Detective Sgt. Tommy Ward said Tuesday that detectives found evidence Jordan Weber had tried to dispose of. Ward declined to disclose what that evidence was.

Comal County sheriff’s detectives located Jordan Weber in San Antonio on Monday evening and arrested him on outstanding traffic warrants. Ron Weber’s body was transported Tuesday to the Travis County Medical Examiner’s Office in Austin, where based on evidence from an autopsy, the case was ruled a homicide, Ward said.

Jordan Weber remained late Tuesday in the Comal County Jail in lieu of an $800 bond on the traffic violations. He also was booked on charges of murder and tampering with or fabricating physical evidence with the intent to impair judgment. Reynolds said that because Weber had not yet been magistrated on those charges, his bond had not changed.

Neighbors who asked not to be identified said Jordan Weber was not a permanent resident at the Hillcrest Forest home but that his father would let him and his girlfriend stay there for extended periods of time. Ward said that although Jordan Weber told detectives why he shot his father, he would not release the motive.
Posted by Sam at 7:00 AM