Show me the monkey! 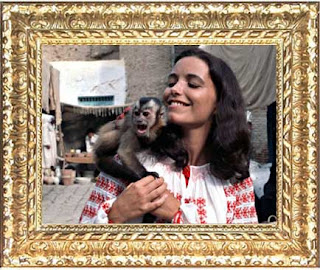 Who is its daddy?

SPOKANE, Wash. — A Spokane woman who hid a sedated monkey under her blouse on a flight from Thailand to Los Angeles — pretending she was pregnant — has been convicted of smuggling charges.

Gypsy Lawson, 29, successfully passed through U.S. Customs in Los Angeles with the rhesus monkey hidden in her shirt after the November 2007 trip.
Her mother, Fran Ogren, 55, of Northport, Wash., accompanied her on the flight from Bangkok and was also convicted.

A jury found the two women guilty Monday on separate charges of conspiracy and smuggling goods into the United States. Sentencing is set for March 3.

They were arrested after Lawson boasted to a clothing store clerk about the airport escapade.
The monkey is now at a primate rescue facility in Oregon.
Posted by Sam at 6:51 AM