BOLO (Be on the look out) 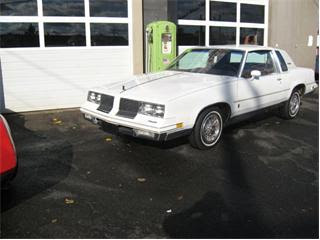 As I've said before,
someone,
somewhere,
out there knows who did this.

Do the right thing please and notify the authorities.
The picture is a 1983 white Olds Cutlass to give you a rough idea of a 1980's Cutlass.

Police searching for 1980s white Oldsmobile in fatal hit-and-run
David S. Rauf - Express-News
A pedestrian died Sunday evening after being hit by two vehicles on a West Side street, officials said.
Police said a man crossing the street in the 5000 block of West Commerce around 8 p.m. was initially hit by one car, which then drove away. As he lay in the street, another vehicle— described as an older model white Oldsmobile Cutlass Supreme — hit and dragged the man about 400 feet to the corner of North San Horacio Avenue, where his body came to rest in front of a bus stop.
The driver of the second car also fled after hitting the man, police said.
The man was taken from the scene to University Hospital in critical condition, but died just before 9 p.m. as a result of injuries suffered during the accident, the Bexar County Medical Examiner’s Office said. His identity was not immediately released pending notification of his family.
A witness who saw the first car hit the man followed the vehicle and flagged down a patrol officer conducting an unrelated traffic stop a few blocks away. Police were able to arrest the driver of that vehicle, but are still looking for the driver of the second vehicle.
Posted by Sam at 7:10 AM