A tragic situation all around 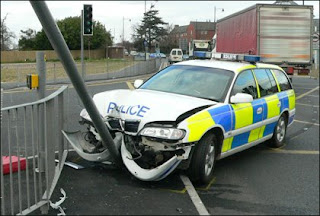 I am terribly sorry that its come to this but I think the charge is an appropriate one.
There was no need to be driving at speeds hitting 102 mph, without your emergency lights on, to go answer a shoplifting call.
Officer Robert Davis paid for the indiscretion with his life.

San Antonio police Monday recommended a manslaughter charge against Officer David Seaton, who last month drove his patrol car more than 50 mph over a posted speed limit without his overhead lights on, running a red light before striking and killing a fellow officer who was clearing roadway flares at an intersection.

Police Chief William McManus on Monday said Seaton's driving that night was reckless enough to justify a charge of manslaughter, a second-degree felony with a punishment range of two to 20 years in prison. The District Attorney's office will review the investigation and determine what charge, if any, will be sent to a grand jury — a process First Assistant District Attorney Cliff Herberg said would take at least 90 days.

Most traffic fatalities caused by speeding alone don't result in charges unless the driver was intoxicated or drag racing. For manslaughter charges to be sought, investigators must find the driver was “consciously disregarding a substantial risk,” Herberg said.
McManus said, “The elements of that offense are clearly present in this case.”

Seaton, 43, who was not wearing a seatbelt in the crash, remained hospitalized Monday, recovering from a fractured pelvis, broken legs and internal injuries.

McManus said Seaton's relatives had been informed of the pending charge.

San Antonio Police Officers Association President Mike Helle said he did not know whether Seaton was aware of the charge, or his role in the wreck, noting Seaton at points has suffered severe memory loss.
He said officers — including Seaton's brother, John, who is an officer with the department's Tactical Response Unit — were struggling to comprehend the tragic accident.
“A lot of police officers are still trying to figure out what were all the intricacies involved,” Helle said. “We just don't know what was going through (Seaton's) mind.”

The Police Department on Monday did not recommend charges against Seaton in the case of the injured civilian motorist, saying that would be left to the District Attorney's office. It also took no disciplinary action against the Air Force veteran and two-year member of the force.
“That all remains to be seen how this case goes,” McManus said. “We're still concerned primarily with (Seaton's) health.”
He added: “It's just an unpleasant situation all around.”

In violation of San Antonio Police Department policy, Seaton drove his patrol car between 98 and 102 mph along a 45-mph stretch of Potranco Road while on the way to a shoplifting call, according to a police source familiar with the investigation but not authorized to talk to reporters.

The call had been deemed “code-one” before the wreck occurred. The police department's policy does not allow officers to exceed the speed limit unless they are responding to a “code-two” or “code-three” call.
Two patrol cars, including Davis' car, were parked and lit up at the intersection of Potranco Road and Hunt Lane before the crash.

Seaton disregarded a traffic signal at the intersection before slamming into civilian Darrell Lampkin's car and veering into Davis, 26, who was pinned beneath the patrol car as it struck a utility pole.
Davis died three days later, after his family removed him from life support Dec. 1.
Lampkin was released from hospital last week.

Davis' mother, Uritta Carter, said Monday that Seaton should be held accountable for his reckless role in her son's death but said the prospect of charges against him doesn't answer her most pressing question — why he was driving so fast to begin with.
“In this situation, no one wins,” Carter said. “(Seaton) will have to live with what he did for the rest of his life. ... But he's still alive and breathing. I won't ever get to talk to my son again.”
Posted by Sam at 6:29 AM