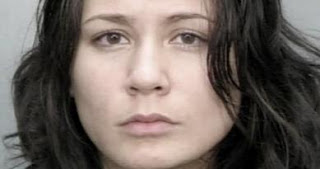 How bizarre is this?

This lady needs some therapy.

Woman lied about missing baby, arrested
MIAMI (WSVN) -- A mother accused of making up a story about her missing baby has been arrested.
Police arrested and handcuffed 22-year-old Meagan McCormic Friday morning, after she reported her child missing at Christmas time, even though the baby never existed to begin with.
Miami police said McCormic had a miscarriage when she was three months pregnant. However, investigators said she pretended to carry the baby to full term in order to keep her boyfriend from breaking up with her.
On Thursday, the supposed parents of the 6-month-old, which McCormic said was named Riley Buchness, made a tearful plea to have their baby come home safely. She said she last left the baby in the care of a babysitter on Tuesday. "I don't even know if he's dead or alive, if they were in a car accident, I don't even know if they're in Florida, I don't know where they are," said McCormic with the man she called the boy's father, 26-year-old John Buchness, crying at her side.
Police said McCormic made up the story when Buchness asked to see the child. To make the story seem authentic, she reported the baby missing to police. Police said McCormick used pictures from the Internet and passed them off as her son.
Police explained McCormic's scheme appeared even more elaborate when she impersonated the supposed nanny that made off with the imaginary baby. "She made something up, and her story was the nanny, who supposedly had the baby all day did not bring the baby back. The fact is she was the nanny. She had a separate cell phone, using it as the nanny saying, 'Yeah, I'm on my way I'm stuck in traffic,' when the baby never existed," said Miami Detective Freddy Ponce.
McCormic will be charged with providing false information to police, which is a first degree misdemeanor. Police also plan to seek restitution. Officials worked throughout the Christmas holiday to find this non-existent child
Posted by Sam at 1:32 PM