The drinks are not on him 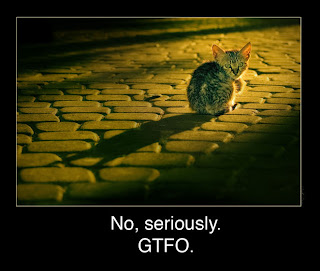 Man o' Law spares no expense getting you news from around the world!
Now from the beautiful isle of Guam out in the Western Pacific, a tale of impropriety?
Or a shrewd businessman?
Methinks it appears to be improper.

The Customs and Quarantine Employee Association is scheduled to hold its Christmas party Dec. 19 at Sgambelluri's Hagåtña bar, Ralphy's.

Sgambelluri said the bar wasn't charging Customs anything to use the venue and would be charging only for the drinks.
"There's no establishment out there that you could walk into and grab a drink for free," he said. "If I gave it for free, you'd probably think I'm stupid." He added that people didn't have to purchase drinks. If they wanted to, they could just come and drink water and eat.

Sen. Adolpho B. Palacios said while there may be nothing illegal about hosting the party at Sgambelluri's bar, he would not have the party there if he were the director of Customs.
"It'll give the perception to the people of Guam of impropriety. A lot of times that counts a lot as to how people see the conduct. I wouldn't do it if that were me," he said.

Customs supervisor and association President Dwayne San Nicolas said he also didn't see a conflict of interest in the head of Customs making money from the party.

"He's running a legitimate business. If we're there and people so choose to come in and party with us and want to buy drinks, they're more than welcome to buy drinks from Ralphy's," he said.

Sgambelluri said, "If you feel that I should give the drinks for free, then I'll tell Customs today to cancel the party completely because I'm not giving drinks out for free."

Sgambelluri said the party was being organized by the association and that government funds weren't being used for the party.

He added the association requested quotes from several venues for the party. The association chose Ralphy's because it was the most reasonable.

San Nicolas said the association got quotes from several hotels including the Hilton Guam Resort & Spa and the Guam Marriott Resort & Spa.
"The hotels can get a little bit too expensive, sometimes upwards of $3,000 to $4,000 and that's just for the venue and the dinner," he said.

San Nicolas said the money made would go back into the association.
"We're not paying for the venue, we're just paying for the dinner, raffles and the band," he said.
"I'm baffled about getting any kind of concerns or complaints about this," Sgambelluri said. "It really hurts me."

While Sgambelluri may not be charging for the use of the bar or getting money from the entrance fees, Palacios said "you're still going to make some profits from the drinks that are sold during the night."

Sgambelluri said if the Pacific Daily News were to run a negative story about the party, he would cancel it.
Posted by Sam at 7:19 AM