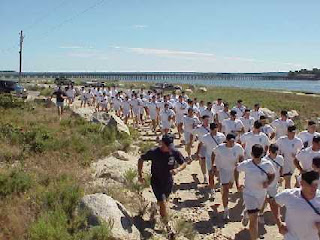 Write good reports and be safe.


A brighter shade of blue
By Scott Sticker


The New Braunfels Police Department is growing with the addition of seven new officers who, after recently graduating with honors from the police academy course, finished their last day of orientation Friday. Out of 22 students in the academy, the seven coming to New Braunfels graduated at the top of their class, with honors including physical fitness, perfect attendance and academic achievement awards.

The group is humble, though -- they gave their partners credit but did not want to brag on themselves.“We really went into it together,” new Officer Doug Trahan said. “We knew we would be working together out on the streets, so we put our heads together to set ourselves up for success.”It was that togetherness and brotherhood that the recent graduates said brought them through the rigorous physical training, which included training on pepper spray and Taser stun guns.

“Our brotherhood was so important,” said Joshua Codrington, who graduated top of the class. “We supported each other to get through it all.”“There wasn’t a shortage of laughing and fun either,” Greg Fuller added. “That’s what got us through the long, hot days.”

The officers-in-training shared major responsibilities in the class. Mark Christian, who retired as a first sergeant after serving in the military for 20 years, was class commander, and New Braunfels native Evan Powell, who spent the past 15 months as a 911 dispatcher, was vice president.

The recent graduates also had to learn crisis management techniques and everything about Texas laws.“These are lessons I’ll never forget,” Patrick George said. “These are things we will use daily.”Although Powell is the only New Braunfels native, all seven echoed excitement about being in New Braunfels.“We live and work here in New Braunfels now,” said Buckley, who spent the past 71/2 years as an officer in Arizona. “We have a vested interest in this town. This is not just a job, it’s a commitment.”

The new officers also said the department’s reputation is widespread.“We heard from several instructors what a good agency this is,” Trahan said. “They all told us it was an up and coming department with great technology and great officers.”And the Police Department echoes the officers’ excitement.“I’m so proud of this group of graduates,” Police Chief Ron Everett said. “They’re going to bring a broad range of experience and skills due to their diverse backgrounds.”
Posted by Sam at 7:18 AM