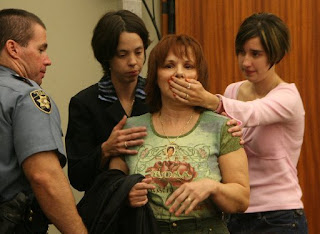 I wonder what computer monitoring system the Judge will use?

I am hoping it is the NetWatch Online program I helped develop when I was a Judge in Bexar County. Why? Because I think it is a great system and beneficial.

Musician, producer sentenced for child porn
By Guillermo Contreras - Express-News
Music producer Sam Mims of New Braunfels was sentenced Wednesday to five years of federal probation for possessing child pornography.
U.S. District Judge Orlando Garcia also imposed several restrictions, including that Sims have no unsupervised contact with children (except his own), that he get mental health treatment, that his computer activity be tracked and that he be placed on electronic monitoring.
U.S. Immigration and Customs Enforcement agents arrested Mims in March 2007 on charges that he downloaded child pornography on his computer. Mims pleaded guilty two months later.
His plea agreement said he was mostly interested in “young solo girls” between ages 12 and 16 and that he found the “toddler sex-type images pretty disturbing.” He also told agents he had attended counseling in the past for his addictions to child pornography and pornography.
Mims runs Syntaur Productions; is a BMI-affiliated songwriter, music producer and keyboardist; and is president of HumBug Records, his Web site says.
The record label focuses on music made in Texas and has signed artists that include San Antonio country singer Michael Clancey. The Web site gives Mims credit for producing and writing Clancey's “A Hundred Second Chances.”
The site also said Mims spent several years as keyboardist with jazz saxophonist Richard Elliot, touring around the world and recording several albums that went to the No. 1 spot in national radio airplay and sold more than 100,000 units each.
Mims has also created music for National Public Radio's “All Things Considered” news program, for many television and radio commercials, and for scores of planetarium shows, the site said.
Mims is also keyboardist for the contemporary jazz band SnapDragon, the site said.
Posted by Sam at 6:29 AM