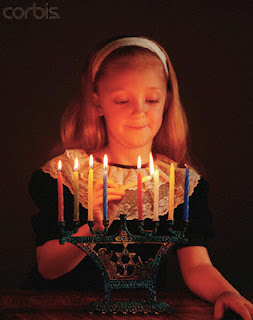 Today is the first day of Hanukkah.

Light the lights to help bring peace and sanity to the world.

Mumbai massacre weighs heavily on Hanukkah
In wake of Mumbai attacks, rabbi urges Jews and others to bring more light to world.
By Eileen E. Flynn AMERICAN-STATESMAN
For Rabbi Yosef Levertov, leader of Austin's Chabad center, the symbolism of lighting the menorah felt heavier at the Texas Capitol on Sunday, the first night of Hanukkah. He was fervently hoping that one flame would inspire more Jews to bring light into a world darkened by the slaughter of more than 160 people in Mumbai, India, last month.
Among the dead were Gavriel and Rivka Holtzberg, who ran a Chabad Jewish center in Mumbai. The couple were targeted because of their Jewish faith, tortured and killed by terrorists. Their 2-year-old son escaped with a nanny.
"In the situation after Mumbai, we made a resolute response that we're going to increase in light our response to darkness," Levertov said.
Around the world, Jews are using Hanukkah's message of religious freedom and light to memorialize the Holtzbergs, dedicating menorahs and celebrations to the slain couple.
For members of the Brooklyn-based Chabad-Lubavitch, one of the largest Hasidic movements in Orthodox Judaism, the loss was devastating because the couple had committed their lives to the movement, creating a Jewish haven in a non-Jewish city, inviting travelers and locals from all walks of life into their home and inspiring secular Jews to discover their religious roots.
Levertov remembers watching the news unfold with his wife, Rochel, and praying for a miracle. He believes the survival of the couple's son was a miracle in itself, but he still winces when thinking of how the boy's parents died.
"We don't know why it happened," he said. "I'm not God's lawyer."
Levertov hopes Hanukkah, which is also known as the Festival of Lights, will inspire people to transform darkness both symbolically and literally by lighting the candles on the menorah during the festival's eight days. Jews, he said, believe the Torah represents light, and a mitzvah — which literally means "commandment" but is often interpreted as a good deed — is like a candle.
The festival commemorates the military victory over the Syrians who had turned the Jewish temple into a sanctuary for their Hellenic religion. The Maccabees fought to reclaim the temple and rededicate it.
Jews believe a miracle occurred when oil that should have fueled a flame for one day burned for eight days.
Keeping that kind of hope for miracles alive is essential to the Jewish experience, said Rivkah Krasnoff, a volunteer at the Chabad center in Northwest Austin.
Krasnoff's parents came from India, so the attacks were particularly unsettling for her.
But, she said, by doing more good deeds and demonstrating a nonviolent response to the murders, Jews can thwart the terrorists' objectives.
"This event strengthens my Jewish pride," she said. "Century after century we've prevailed over every attempt to destroy us."
Posted by Sam at 7:52 AM