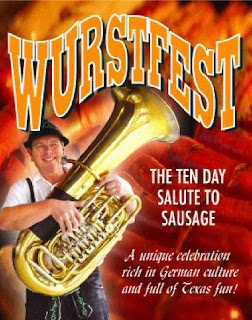 Okay, I'm working, I believe, on Monday evening from 8:00 pm to 11:00 pm at the New Braunfels Republican Women's Booth.

Come and get your Fried Pickles!!


Made with sausage, beer and commitment
By Chris Cobb - The Herald-Zeitung

The gates will swing open today to welcome visitors to the 49th annual Wurstfest, kicking off another celebration of New Braunfels’ German heritage with a seemingly endless supply of food, beer and polka music.

And like many long-time participants, Bucky Smith knows just how difficult it is to put together the 10-day salute to sausage so unique to New Braunfels.

“You can’t imagine how much work it takes,” said Smith, who has operated a booth at Wurstfest for more than 40 years.

She recently celebrated her 80th birthday, and she’s spent the past two weeks preparing for the annual onslaught of customers who will stop by “Bucky’s Pickle Factory” to treat themselves to her popular fried pickles. The stand benefits the New Braunfels Republican Women.

She’s been cleaning the kitchen, hanging lights, stockpiling food and getting her admittedly gaudy booth ready for another Wurstfest. And, as she has for more than four decades, she does it pretty much by herself.

She’s just one of what Wurstfest Chairman Herb Skoog estimated to be 5,000 volunteer workers who will pitch in over the next 10 days. Many will work long hours.

Smith guessed that she’d be working the booth for just about every waking moment over the next 10 days.

“I may as well sleep here,” she said.

For Wurstfest veterans, it’s an annual commitment that can be taxing.

She’s been working the annual festival for 47 years.

Why does she come back every year?

“I’ve got five booths, I have to come back,” she said.

The original one-day festival was held downtown in 1961, according to Skoog. It moved to the current Wurstfest grounds in 1968, and longtime participants like Smith and Scheel have watched it grow in popularity since then.

But the allure is the same as it was when the festival first started, according to Martin Palm, whose family has operated the Wursthaus Edelweiss booth since 1968.

“People still come here for food, beer and polka dancing,” Palm said. “And they’ll be back this year for the same thing.”
Posted by Sam at 6:49 AM