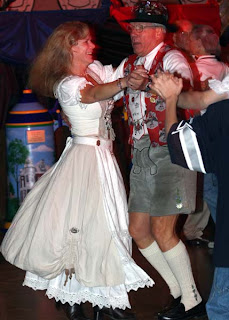 I was there yesterday afternoon to early evening in the biergarden.

What a beautiful evening it was, the weather was quite cooperative. I got a real kick out of watching the kids dancing the chicken dance and of course, listening to the bands playing.

NEW BRAUNFELS — The 10-day celebration of sausage, beer, polka and all things German kicked of with Wurstfest’s ceremonial biting of the sausage Friday as a visiting German couple celebrated a ceremony of a different kind.

Newlyweds Jessica and Antonio Mastandrea, from the area near Braunfels, Germany, were spending a week of their honeymoon experiencing New Braunfels’ version of the traditional German Oktoberfest. Festival officials predicted that between 120,000 and 150,000 visitors will attend the 49th annual Wurstfest this year. About half of those, like the Mastandreas, likely will come from outside New Braunfels, said Herb Skoog, director of Wurst Relations.

Jessica Mastandrea first visited New Braunfels eight years ago through a Wurstfest exchange program. After a fellow exchange student attended the couple’s wedding two months ago, the Mastandreas decided to return the favor with a visit to New Braunfels during their honeymoon.