South of the border 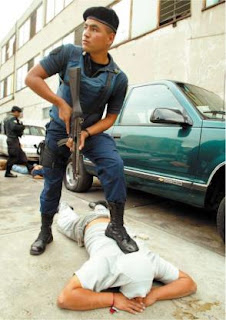 This time in front of a day care center!

NUEVO LAREDO — Several people were killed and at least three were injured in a dramatic shootout Wednesday afternoon between Mexican soldiers and drug traffickers that broke out in front of a day care center as parents were picking up their children.

No children or parents were hurt; one of the injured was a woman who was driving by and suffered a minor cut from shattered glass.

“When I heard the gunshots at about 2:30 in the afternoon, I ran to the OXXO store,” said another woman who would only identify herself as Maria. OXXO is a popular chain of convenience stores on the Mexican border. “From there, I could see some men in cars ... taking out guns and then I saw them dead. I was really scared, but I wanted to know what was going on.”