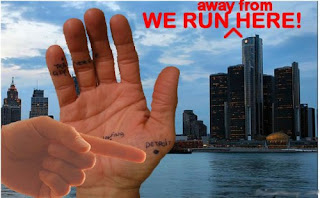 Heck, they're lucky they weren't murdered.

Okay, okay. That was a bit harsh.

They were lucky they weren't assaulted, robbed, murdered, and then raped.

It was held in Detroit, after all.

DETROIT (AP) — A half-marathoner and two other runners died during the Detroit marathon on Sunday, organizers said.

Daniel Langdon, 36, of Laingsburg, collapsed at about 9:02 a.m. between the 11- and 12-mile markers, said Rich Harshbarger, vice president of consumer marketing for the Detroit Media Partnership.