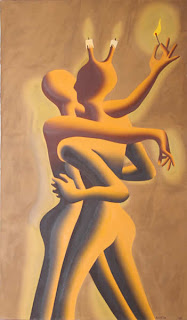 Under the old common-law felony murder rule this is true.

You commit a felony offense which results in a death then you have committed a felony murder.

The problem for the prosecutor is to get the jury to "connect the dots" and see that the stress of the arson fire caused the heart attack which led to the deqath of the victim.

SAN BERNARDINO, Calif. (AP) -- Retired accountant James McDermith's mad dash to retrieve a camper and pack it with belongings as a wildfire chewed closer to his home six years ago may have cost him his life. But it wasn't the flames or smoke that got him.

The 70-year-old church deacon was one of five men to have a heart attack during the 2003 blaze that surged through the San Bernardino Mountain foothills.

With evidence that stress from the wildfire led to the deaths, prosecutors took the unusual step this week of charging a suspected arsonist with five counts of first-degree murder that could signal a tough new standard for arson cases in a region held hostage by fire.