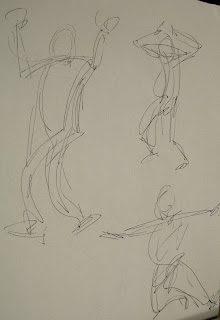 I'll bet he doesn't do this again.

In an 8-1 decision today, the Texas Court of Criminal Appeals denied Reposa’s application for a writ of habeas corpus in his contempt case. Judge Lawrence Meyers, the lone dissenter in Ex Parte Adam Reposa, did not write an opinion.

Acting on Swaim’s motion, Breland held Reposa in contempt. Senior Judge Paul Davis of Austin, sitting by assignment, subsequently found Reposa guilty of contempt and sentenced him to 90 days in jail. Reposa appealed to the CCA on June 2, 2008. The CCA had set bail for Reposa pending the disposition of his case.

In its decision today, the CCA overruled Reposa's five issues challenging the judgment of contempt and sentence. With regard to Reposa’s challenge to the sufficiency of the evidence, Womack wrote for the majority, “Regardless of the fact that the gesture was not directed at Judge Breland, it nevertheless was a purposeful act of disrespect and an affront to the dignity of the court. As such, it rises to the level of criminal contempt.” Swaim declines comment on the CCA’s decision.

Travis County Attorney David Escamilla as well as Austin solo Karyl Krug, who represents Reposa in the habeas corpus writ application, each did not immediately return a telephone call. When told of the CCA’s decision, Reposa said, “Oh well.” When asked what happens next, Reposa says he doesn’t know. “I need to talk to my lawyer,” he says. But Reposa adds that he does not think he can file his writ application in another court.