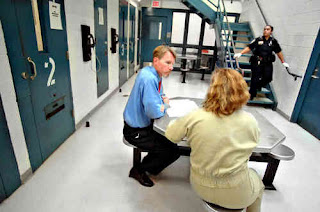 Perhaps a possible solution as well, particularly for smaller rural counties, would be to form a multiple county public defenders office.

Particularly since the District Court jurisdiction is multiple county as well. This way the costs can be shared across several counties.

KERRVILLE — A spike in the local inmate population, combined with the high cost of court-appointed defense attorneys, has Kerr County commissioners considering the establishment of a public defender office.

The jail count had dipped to 96 inmates, a 15-year low, due to a special court docket initiated this spring that allows suspects to resolve their cases through plea deals offered soon after their arrest.

But 152 people were detained at the 192-bed lock-up Monday, which County Commissioner Buster Baldwin called “alarming” because the county may need to spend millions to expand the jail if the population isn't kept in check.