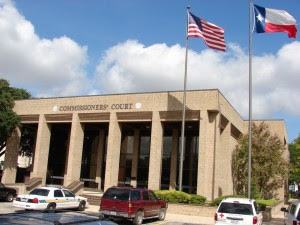 I hope it passes.

Comal County Commissioners could vote today to begin the process of issuing debt to pay for a downtown county justice center.

Commissioners will consider publishing a notice of intent in the Herald-Zeitung to issue certificates of obligation to pay for the facility during today’s Commissioners Court meeting.

The vote would potentially seek to forego a bond election and pay for construction of the building without giving the decision to voters. The four-story justice center, to be built on Seguin Avenue between Bridge and Zink streets, has been estimated to cost more than $30 million.

County officials said Wednesday that a published notice of intent would begin a 30-day window for residents who want a bond election to gather signatures.

Any petition to request a bond election must have 3,668 verified signatures, which is at least 5 percent of voters who turned out in the November general election in 2008. Those signatures must be verified before the certificates of obligation can be officially issued.

“The timeline has definitely been moved up,” said, Glen Peterson, a hopeful to replace Danny Scheel as Comal County Judge and a leader in the bond-election petition drive that started in September. “There’s now some more urgency to it, but it’s not easy.

“Gathering all those signatures is quite an endeavor.”