Bailing out a failing city 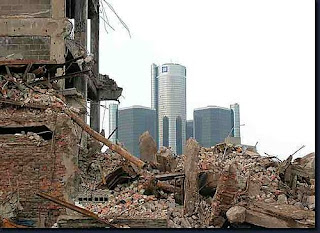 I don't want to know, but its like watching a slow speed train wreck.

I can't look away.

Some people in line falsely believed they were registering for $3,000 stimulus checks from the Obama Administration.City officials told Local 4 that Detroit was granted $15 million to help residents pay bills and their rent or find temporary housing for the homeless.

The Detroit Planning and Development Department (PDD) is taking applications Tuesday and Wednesday for the Homelessness Prevention and Rapid Re-Housing Program.The applications deadline is Oct. 7. Applications can be picked up in advance Tuesday at neighborhood city halls.

All locations will close Tuesday at 5 p.m.

Local 4 has learned that the city has run out of applications at several of the city hall locations.The remaining 5,000 applications can be picked up Wednesday at the Cobo Hall in the Riverview Ballroom from 10 a.m. to 2 p.m.Already filled out applications can be submitted at the Cobo Hall from 10 a.m. to 2 p.m. or sent in the mail to the Detroit Planning and Development Department at 65 Cadillac Square, Suite 1400, Detroit, MI., 48226.

Applications must be postmarked by Oct. 7.

To qualify, a person must have been a resident of Detroit for more than six months, must be homeless or facing eviction and must be able to maintain housing after receiving assistance.Also, a resident must make 50 percent less than the median area income, which would be less than $24,850 for single Detroit residents and less than $35,500 for a family of four.No mortgage assistance will be available through this program.

Once applications are reviewed, only applicants eligible for funding assistance will receive notification from a service provider.

For more information, visit www.Detroitmi.gov.
Posted by Sam at 7:00 AM