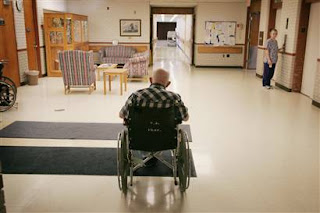 Where was the facility's security?

An elderly woman asleep in her bed at a senior care facility on the Northeast Side was awakened early Saturday morning when a man entered her room, climbed onto her bed and began to choke her and hit her in the face repeatedly, police said.

Janice Maier, 77, told police that she had never seen her alleged attacker before, according to a San Antonio Police Department incident report.

Maier, a resident of Clare Bridge Specialized Memory Care, a Brookdale Senior Living facility in the 14000 block of Nacogdoches Road, was transported to University Hospital after the incident.