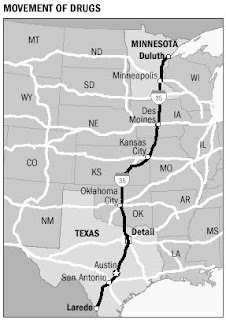 Is this something we need to be concerned about for our southern border?

I'd sure hate to think that the violence will "spill" over onto American soil, even though, apparentlt, bullets have.

DHS needs to get busy soon, I think.

FYI, in case you don't know, Comal County is just NE of San Antonio on the map and the I-35 "interstate drug highway" runs through it.

MATAMOROS, Mexico — This border city near the mouth of the Rio Grande is eerily quiet most days — because its streets are largely the lair of the Zeta gunmen, the most feared and savage gangsters in Mexico.

On other days, gunbattles ensue in broad daylight between heavily armed Zeta enforcers and those who get in their way — as happened last month when soldiers stopped a suspicious carload of men on a street that runs along a Rio Grande levee through a wealthy Matamoros neighborhood. The gunmen opened fire and tossed grenades. Bullets tore into houses and businesses and even flew across the Rio Grande, hitting buildings and a parked car at the riverfront campus of a University of Texas branch campus.

“We have this fear of being in the wrong place at the wrong time,” said anthropologist Tony Zavaleta, acting provost of the University of Texas at Brownsville, whose family has lived on both sides of the Rio Grande for centuries.