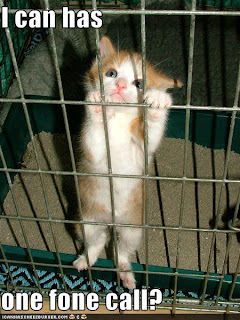 Don't be drunk and driving to the jail when you go to pick up your drunk friend who's in jail for DWI.

LAFAYETTE, N.Y. (AP) - Troopers have charged a 22-year-old upstate New York woman with aggravated driving while intoxicated after she showed up drunk at the state police barracks to give a ride to a friend who had been arrested earlier for DWI. Troopers said Stacy Kolinski had a blood alcohol level of .20 percent - more than double the legal limit - when she arrived at the Lafayette barracks 10 miles south of Syracuse around 2:30 a.m. Sunday.

Kolinski came to the barracks to give a ride to 34-year-old George Reddick who was stopped for speeding earlier Sunday morning and charged with DWI and misdemeanor criminal possession of cocaine.

Reddick and Kolinski were both issued tickets to appear in town court at a later date. Troopers said they don't know if they have lawyers.