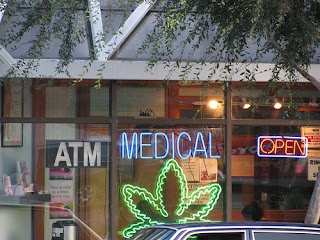 Maybe he was starting his own medicinal marijuana shoppe?

That was his inventory.

San Antonio Police officers found more than 300 pounds of marijuana Monday evening in a truck that was pulled over for an expired registration.

Officer Matthew Porter, a department spokesman, said officers with the Tactical Response Unit made the routine traffic stop at 6:30 p.m. at the intersection of Commercial and West Burcham avenues on the city's South Side.

The officers became suspicious because of the driver's behavior, Porter said. The driver gave the officers consent to search the flat-bed pickup and they found 385 pounds of marijuana bundled and wrapped in black plastic.