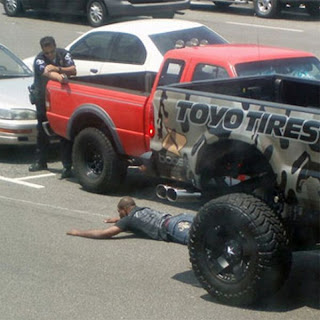 So apparently he was found guilty of a second degree felony and the jury may now assess punishment between 2-20 years in prison.

Okay, I will live with that.

A jury found Andrew Star Glick guilty Wednesday of evading arrest, but found him not guilty of use of a deadly weapon.

Glick, 35, was arrested April 6, 2008 following a brief flight from police through New Braunfels in a stolen truck. After crashing into a utility pole, Glick fled the scene on foot. He was later apprehended by police on the bank of Lake Dunlap.

Prosecutor Sammy McCrary failed to convince the jury that Glick’s use of the truck during his flight constituted “use of a deadly weapon.”

Glick will appear before Judge Gary Steel in November for the sentencing portion of the trial. He faces two to 20 years in prison.

McCrary and defense attorney Dave Willborn expected Glick to be found guilty on the evading charge. Instead, both men focused closing statements on the “use of a deadly weapon” charge.

“There is no question as to whether Aaron Glick fled from police in a vehicle,” Willborn said. “He was evading arrest and that’s what he is guilty of today. But the additional charge (use of a deadly weapon) – it can’t be a question of whether Glick might have hurt somebody, but whether somebody was actually in danger.”

Willborn stated this was not the case, citing police testimony Tuesday confirming there was no mention of “use of a deadly weapon” on the original 2008 police report.

“There’s nothing in state law that says if you drive while intoxicated, your vehicle is a deadly weapon,” he said.

Prosecutor Sammy McCrary dismissed the defense’s argument that Glick’s actions were simply an attempt to get away from police.

“We’re not required to prove that police had to take evasive action or that (Glick) tried to hit somebody,” McCrary said. “Were there other people present during this chase? Yes. Did he endanger those people? Certainly.”

After a deliberation lasting most of the day, the jury determined Glick evaded arrest, but did not use the truck as a deadly weapon.

“We’re very pleased with the verdict,” Willborn said. “We never thought for a second we would get off on the evading arrest charge, but we felt (Glick) did not use the truck as a deadly weapon and the jury agreed with us.”

McCrary said he was disappointed with the verdict, but hopeful that, in light of Glick’s criminal record, he would receive the maximum penalty of 20 years.

Glick has convictions for unlawfully entering a vehicle in Georgia, attempted malicious wounding in Virginia, and convictions in Texas for forgery and unauthorized use of a motor vehicle, according to the grand jury indictment.

Glick was returned to the Comal County jail, where he has been held since his arrest on a $12,000 bond.
Posted by Sam at 6:42 AM