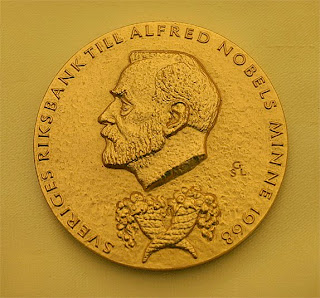 Okay, I think the Nobel Prize committee has taken complete leave of their senses.

I recognize that President Obama has said many lofty things, like let's de-nuke the world, of course, while ignoring Iran's march to arm itself with Nukes. His saying he will close Gitmo, while he hasn't, so on and so forth. he'll meet with Iran, which he hasn't, and won't meet with the Dalai Lama. You get the picture.

"Rather than recognizing concrete achievement, the 2009 prize appeared intended to support initiatives that have yet to bear fruit: reducing the world stock of nuclear arms, easing American conflicts with Muslim nations and strengthening the U.S. role in combating climate change."

Well cool. I promise to end strife, make the planet cool, meet with Muslims, Animists, Jews, Christians, Buddhists, Agnostics, Druids, and the like, and I will take everyone's nuclear weapons too.

Check out the Saturday Night Live skit from last weekend.

Maybe this was a consolation prize for not getting the Olympics last week. And no, I am not being a racist.

OSLO — President Barack Obama won the 2009 Nobel Peace Prize on Friday for "his extraordinary efforts to strengthen international diplomacy and cooperation between peoples," the Norwegian Nobel Committee said, citing his outreach to the Muslim world and attempts to curb nuclear proliferation.

The stunning choice made Obama the third sitting U.S. president to win the Nobel Peace Prize and shocked Nobel observers because Obama took office less than two weeks before the Feb. 1 nomination deadline. Obama's name had been mentioned in speculation before the award but many Nobel watchers believed it was too early to award the president.

Speculation had focused on Zimbabwe's Prime Minister Morgan Tsvangirai, a Colombian senator and a Chinese dissident, along with an Afghan woman's rights activist.