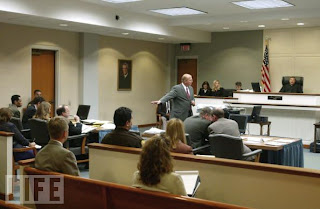 Round up the usual defense attorneys!!

San Antonio police arrested three people and are looking for another suspected of killing a 32-year-old man they plotted to rob Friday afternoon at a hotel near downtown.

Larry Mitchell, 56, and Tonya Moody, 33, remain in jail on $500,000 bond. All three face a capital murder charge in connection with Holmes' death.