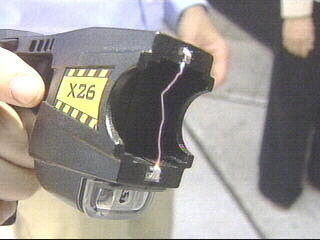 Wow, it'll look like the scene in The Hangover.

Not a pretty scene......definitely not.

Despite an advisory issued last week warning law enforcement officers against firing stun guns at a person's chest because of a “remote potential risk of cardiac arrest,” authorities in San Antonio and Bexar County said they would continue to rely on the weapon as a less-than-lethal tool to defuse escalating situations.

“SAPD's training exceeds that recommended by the manufacturer and is in line with the latest warning in reference to the proper target zone,” San Antonio Police Chief William McManus said in an e-mail Thursday, adding that he is confident his officers are properly trained to wield Tasers, carried by 236 members of the force.

Officers undergo 16 hours of training to use the 50,000-volt stun guns, which have been deployed hundreds of times since distribution began in December 2006. This year, officials said, Tasers have been used 95 times.