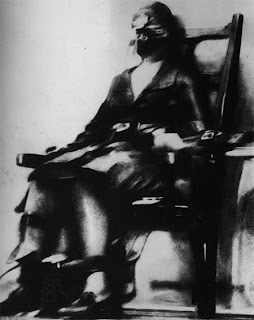 Now, Judge Rodriguez, send her to prison for the rest of her life.

She's lucky she can't meet the fate of Ruth Snyder, pictured here in the electric chair for murdering her husband to collect his insurance money.

A federal jury Thursday convicted a San Antonio woman of having her estranged husband, an Air Force sergeant, killed to collect nearly $600,000 in insurance and survivor's benefits.

Tolliver was in a bitter divorce and custody battle with Tech Sgt. Derrick Tolliver when he was shot twice in the head Nov. 20, 2000, at his Converse home. The couple had two sons together and Theresa Tolliver had a daughter from a previous relationship.