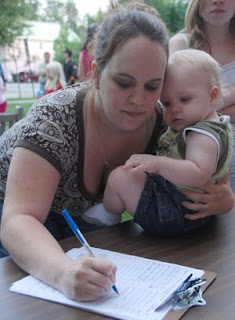 A tempest in a teapot?

More costs and legal expenses for the County? Grandstanding?

Not an impressive way to run a campaign for County Judge or to show a predominantly right of center conservative elctorate you would be a good steward of resources.

BTW I have never heard of getting partial petitions verified as you go along. Turn them in ahead of time when you have what you believe are more than enough signatures and then coolect additional ones if you have the time left to do so.

Residents seeking to have the construction of the Comal County Justice Center put to a vote are crying foul, after county authorities told petition organizers Tuesday they needed more signatures before the verification process could begin.

Glen Peterson, who is leading the petition effort to force a bond election, wrote a protest letter to various county officials contending that the county should begin verifying signatures on his petition, even if he does not yet have enough to trigger a bond election.

Petitioners need to gather more than 3,300 verified signatures before Nov. 19, when Comal County Commissioners could likely vote to forego an election and issue debt to pay for a $36 million downtown justice center.

Peterson sought Tuesday to have the county begin verifying 1,076 signatures he and others gathered. He was denied his request by the County Tax Assessor-Collector’s office.

She said for this type of petition, any early verification must be turned into the tax office 10 days before the set deadline with well above 5 percent of the registered voter turnout in the past election — which in this case is more than 3,300 voters.

Peterson said in the protest letter that he disagreed, and that the tax office should begin verifying and counting them. Peterson hand delivered his letter to Judge Danny Scheel, Assistant District Attorney Jennifer Tharp and Cathy Talcott, Comal County Tax Assessor.

The tax office also told Peterson he could not submit voter registration cards he was attempting to file in person for 138 other people. Talcott said, unless submitted by an official deputy voter registrar, voters must be present when attempting to register in person to prevent possible fraud.

She said the registration cards could be submitted by mail. Peterson requested legal clarification on each matter from Comal County.
Posted by Sam at 6:31 AM