WTF!! Four years in his head?? 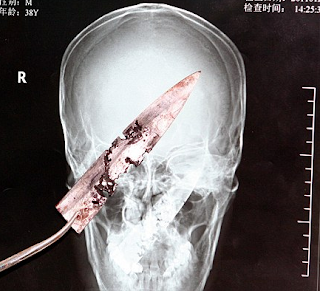 Is this a testament to the benefits of a State-run health care plan?

BEIJING – Surgeons in southern China successfully removed a rusty, 4-inch (10-centimeter) knife from the skull of a man who said it had been stuck in there for four years, the hospital said Friday.

Li Fuyan, 30, had been suffering from severe headaches, bad breath and breathing difficulties but never knew the cause of his discomfort, said the senior official at the Yuxi City People's Hospital in Yunnan Province.

Li told doctors he had been stabbed in the lower right jaw by a robber four years ago and the blade broke off inside his head without anyone realizing it, said the director of the hospital's Communist Party committee's office who would only give his surname, He.