Don't try this at home 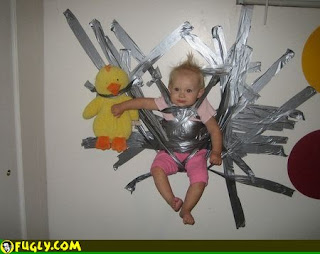 BROOKHAVEN, PA.: A southeastern Pennsylvania woman who police say showed them a photo of her toddler duct-taped to a chair as part of an identity theft complaint is being held without bail.
Police arrested 21-year-old Caira Ferguson on child endangerment and other charges Wednesday.
Ferguson went to police earlier this month to complain that her identity had been stolen and someone had posted online a photo of her young daughter bound to a chair with duct tape covering her mouth.
Nether Providence Township police say Ferguson admitted taping the girl to a chair about seven months ago.
Ferguson denied the allegations to reporters as she was transported to jail.
Ferguson's mother says she thinks another child was responsible.
The girl is in custody of child welfare workers.
Posted by Sam at 7:40 AM