Time to pay for your play 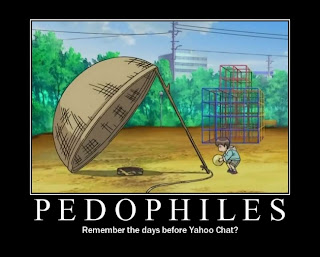 At least 9+ years later if they give you parole when you are eligible.

I wouldn't count on that happening.

Also, BTW I don't think Pedophiles are well liked in prisons, even convicted felons, like murderers and drug dealers have standards.

I'd watch my backside if I were you.

Former elementary school principal Michael Alcoser, an admitted pedophile who was accused by two students of molesting them in his office, was sentenced Wednesday to 18 years in prison.

Alcoser, 44, had been out on bail since his arrest three years ago. His family blew kisses as he was placed in handcuffs and taken to jail immediately after state District Judge Mary Roman read the jury's verdict.

Neither of his accusers nor their families were present as the late-night verdict was read.