Will the artist become stuck-up? 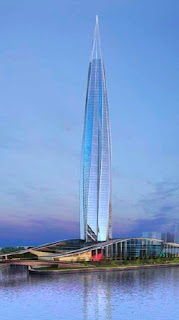 I hope you forgive me for not posting a picture of this apparently award-winning design.

That is a a picture of a proposed building in St. Petersburg, not the bridge phallus.


The memorable phallus painted on a bridge opposite the security services’ HQ headquarters in St Petersburg, dubbed “A member in KGB captivity” has been nominated for a state award.

Despite thrusting its disapproval of the state’s FSB security organ into the Petersburg skies when the bridge was raised, the project by art pranksters Voina, pictured above, has been earmarked for a prize from the State Centre for Contemporary art.

Penis in the sky
The cheeky graffiti was unsheathed on June 14, 2010, as Petersburg prepared to host its annual economic forum.

Several Voina activists painted a giant penis on one of the sections of the bascule bridge with a white paint opposite a local department of FSB.

At night, when the bridge was open, the drawing greeted St Petersburg’s skyline and stared through the windows of the intelligence services. It was removed a short time later.