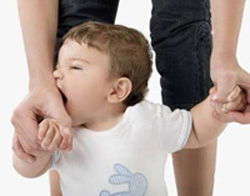 You're having marital problems so you bite the 1 year old stepson on the leg?

That's going to solve it all won't it?

A San Antonio woman is accused of biting her stepson, a toddler, citing marital difficulties with the boy's father, on Wednesday.

Amber Kaylenn Lindner, 18, is being held in Bexar County Jail on $25,000 bail. She faces a charge of intentionally injuring a child, causing serious bodily injury, a felony.

An arrest warrant affidavit states on Wednesday, a Bexar County deputy called to investigate an injured child discovered a large bite mark and bruise on the right thigh of Lindner's stepson, 1.