Enough is too much 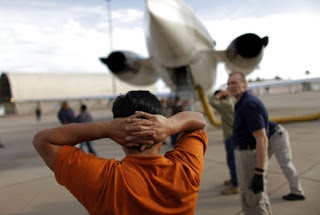 At what point do we, as citizens, say ENOUGH?

The Federal Government is letting us down in its enforcement of its own immigration laws and we have practically an open border on the south.

Why not allow States to enforce laws already on the books?  And no, I am not a hater, but someone whose parents immigrated here legally.

MANASSAS, Va. – A Salvadoran man who was ordered deported nearly a decade ago but never left has been charged with three counts of first-degree murder in a series of shootings and a knife attack in a Virginia suburb of Washington, authorities said Friday.

Reyes Alfaro knew all of the victims, he said, but police were still sorting out the exact relationships.

The killings touched off further discussion of illegal immigration in Manassas and surrounding Prince William County, which was one of the early flashpoints in the national debate over whether local authorities should play a role in enforcing the nation's immigration laws.