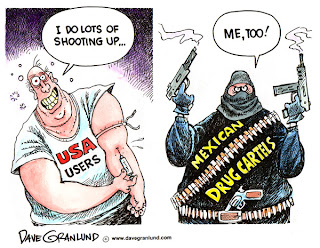 It sure seems like it won't stop; doesn't it?

I'm more and more concerned it will spill over the border too.

Let's not forget this is all driven by US demand.

MEXICO CITY (AP) — Suspected drug-related violence left at least 28 people dead across Mexico over the weekend, including 14 killed by gunmen in bars in the country's north, authorities said Sunday.

In Coahuila state, across the U.S. border from Texas, nine men died late Saturday when gunmen opened fire inside two bars in separate attacks, state prosecutors said in a statement. Eleven others were wounded.