Queen of all legal battles - Part III The Queen is dead, Long live the Queen. At least until the jury trial 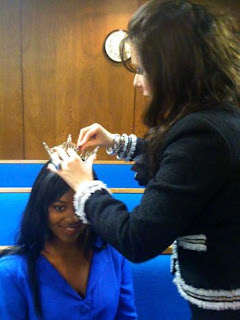 Having lost the Temporary Restraining Order, the Miss Bexar County Organization Inc.wasted no time in stripping the crown from Domonique Ramirez and crowning the first runner-up, Ashley Dixon, as Miss San Antonio 2011.

In fact the coronation of the new Queen apparently took place in the courtroom itself!

That must've been a sight to see.

BYO popcorn to the trial in March I bet it'll be a hoot to watch.

Court rejects ousted Miss S.A.'s bid to reclaim title
Ashley Dixon, the first-runner up, was crowned in the courtroom
By Guillermo Contreras - Express-News

The Alamo City has a new Miss San Antonio 2011, at least for now: Ashley Dixon.

Dixon, the first-runner up at last year's pageant, received the crown in a courtroom Wednesday after state District Judge Cathy Stryker rejected a bid by ousted queen Domonique Ramirez to get it back.

The change will last at least until Ramirez's full lawsuit is heard at a jury trial set March 14.