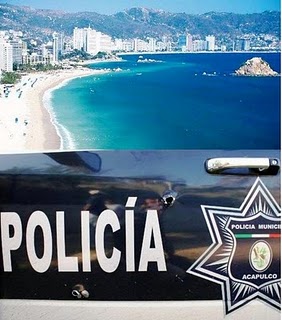 When will Mexico put an end to the lawlessness?

Better question.  Can they put an end to the lawlessness?


Acapulco, Guerrero, Mexico - Second Grader Executed In Acapulco
Staff Reporter - Blue Water - Green Tree
Today was another painful reminder of the senseless on going cartel related executions of innocent children. This one occurred in the port city of Acapulco in the state of Guerrero, Mexico. Early Saturday morning in the Infonavit Alto Progreso neighborhood in Acapulco, the lifeless body of a seven year old elementary school child was discovered.

He had been reported missing at 10:40 a.m. on Friday. This was after not returning from running a short distance errand to the neighborhood store to buy his Mother, María de los Angeles Jiménez Sotelo, age 36, a package of tortillas.

His disappearance was reported to the police "Policia Preventiva", and she had also spoken on the local television station pleading for her son's safe return. All day Friday and into the night her family members and many neighbors had searched the entire neighborhood.

She had also distributed dozens of flyers on the various walls, and lamp posts with the child's photograph in a futile attempt to find him.

At the scene of the crime outraged residents commented that the little boy was on his way back to his house when he was forced into a vehicle by unknown men. Another neighbor told of how they as well as several policemen had swept the neighborhood looking for the little boy. Even late into Friday night there were several army trucks still searching the surrounding streets.

One neighbor lamented, "They waited until everyone had left before they dropped off the body." That neighbor remembers seeing the BOMU convoy after midnight, driving on Paseo de la Cañada, as she was coming home from working at a factory.

The body that was found on Saturday at 6:30 a.m. was that of the missing seven year old little boy, Antonio Rodrigo Jiménez Cortes. His lifeless body was found on the steps of pedestrian overpass of the Paseo de la Cañada, just a few feet away from Building # 10 and apartment # 201 where he lived with his Mother.