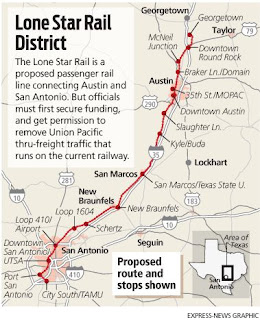 I'm tired of hearing about this, year after year, a study here and a study there.

Gas is hitting $3.00 a gallon, we're more and more dependent on getting oil from governments and regions which are fairly unstable or inimical to us.

We're chasing after decreasing reserves of petroleum and competing for these diminishing reserves with emerging third-world economies like China and India; the law of supply and demand being what it is the price will stay high and get higher.  Also let's not forget our current Administration has cut off exploration and drilling in the Gulf of Mexico and elsewhere in our country.

You want to "Green" things up?  Build this rail system and they will come.

San Antonio officials will continue to pursue a passenger rail line that one day could connect the Alamo City to Austin, a transit project that's already been in the works for more than a decade.

The city's endorsement Wednesday of the Lone Star Rail District initiative came on the heels of the Obama administration's announcement that it will support a $53 billion high-speed rail initiative over the next five years, the most money committed to rail in over a generation, emphasized Tullos Wells, vice chairman of the district board, an entity that includes cities, counties and transit authorities along the 120-mile corridor.

“This is a time to make this project sail,” Wells said.