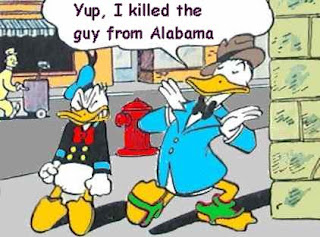 It sucks to be him.

Go get  him Lorina Rummel!

Attorneys: Man bragged about capital murder
With no prints or DNA, case built on his own words.
By Craig Kapitan - Express-News

No fingerprints, DNA or surveillance footage connect Charleton Bradshaw to the robbery and fatal stabbing two years ago of an out-of-towner spending the night at the crime-ridden Alamo Lodge motel.

But where physical evidence fails, Bradshaw's own bragging links him directly to the slaying, prosecutors said Wednesday during opening statements for his capital murder trial.

Bradshaw, 27, is the first of four defendants to stand trial for the October 2009 death of Alabama resident James Jerome Holmes, 32. Prosecutors are not seeking the death penalty, meaning that if convicted he will face a mandatory sentence of life in prison without parole.