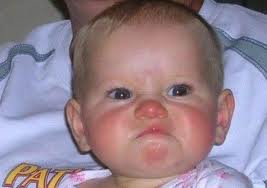 That's quite the record for an 8 year old.

The photo looks innocent enough: an 8-year-old boy with a stare indicating that he'd rather be anyplace else than in front of the camera.

But this picture is different. It's actually a mug shot taken when the boy was arrested and placed in handcuffs — something that's happened to him five times in the past four months — for battering a school employee.

The Orlando Sentinel is not naming the boy because of his age.