Not a benign club 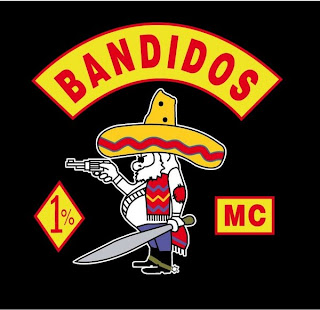 Gee, and here all along I thought they were just a group of guys that got together to ride their motorcycles around.

Who knew they were affiliated with the Zetas Cartel?

Saying they had “hit at the heart” of the Bandidos Motorcycle Club, authorities here announced Friday they had arrested 10 of its members and closed a pipeline that had brought $600 million worth of methamphetamine to the area in the past decade.

The arrests were dubbed “Operation Screaming Eagle” and occurred this week during a national surge of arrests of people linked to Mexican drug cartels in response to the killing of a U.S. law enforcement officer in Mexico.

Federal, local and state officers arrested 15 affiliates of the Zetas drug cartel and seized $10,000 in cash, guns and drugs in the San Antonio and Austin areas as part of national sweep, which the U.S. Drug Enforcement Administration said was meant to send a message to the drug smuggling industry that it wouldn't tolerate an attack on its agents.