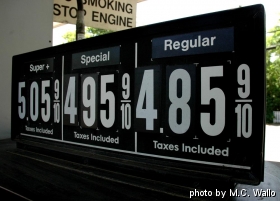 Expect oil prices to zoom exponentially just on this being reported.

TRIPOLI (Reuters) - The leader of the Al-Zuwayya tribe in eastern Libya threatened on Sunday to cut oil exports to Western countries within 24 hours unless authorities stop what he called the "oppression of protesters".

Speaking to Al Jazeera, Shaikh Faraj al Zuway said: "We will stop oil exports to Western countries within 24 hours" if the violence did not stop.

The tribe lives south of Benghazi, which has seen the worst of the deadly violence in recent days.
Akram Al-Warfalli, a leading figure in the Al Warfalla tribe, one of Libya's biggest, told the channel:

"We tell the brother (Gaddafi), well he's no longer a brother, we tell him to leave the country."

The tribe live south of the capital Tripoli.
Posted by Sam at 8:07 AM