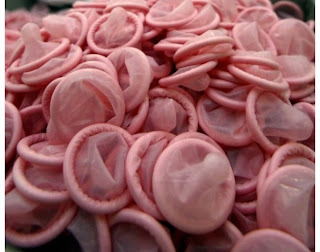 Sounds like they were expecting some major fun, huh?


KUALA LUMPUR, Malaysia (AP) — Malaysian police have arrested three suspects involved in the heist of some 725,000 condoms, which have not yet been found.

Mohamad Shukri Dahlan, the police chief of Malaysia's northern Perak state, says the heist was "an inside job." He said Friday the suspects work for the firm responsible for transporting the condoms from the factory to the port, where they were to be shipped to Japan.

Sagami Rubber Industries Co., one of Japan's biggest condom makers, said 85,000 boxes of ultra-thin condoms vanished last month in the heist. The merchandise was worth $1.5 million.

The suspects intended to sell the condoms in Malaysia, but Mohamad Shukri said they had probably not succeeded.