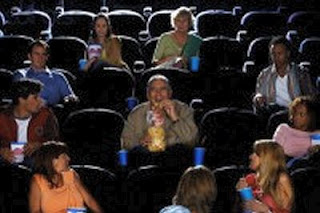 I guess the shooter will lose his ability to practice law in Latvia.


One man's attempt to watch "Black Swan" in peace and quiet ended tragically this weekend when he was killed for complaining about a fellow moviegoer's noise.

The 43-year-old man was attacked in a movie theater in Latvia on Saturday when he asked a particularly loud popcorn-munching member of the audience to keep it down.

The offending eater, 27, was apparently so insulted that he opened fire with a "legally registered" weapon, the Guardian reported.

Identified as "a graduate of the police academy who holds a doctorate in law from the University of Latvia," the shooter was then reportedly "overpowered by other audience members until cops arrived."

Initially, many sources incorrectly reported that it was the 42-year-old who had been eating loudly, and that he was shot for his distracting chewing.

The Register later clarified the story, crediting a Latvian reader who wrote in to correct the facts.

The reader, who translated the original report from Latvian news agency Leta, also revealed that the 27-year-old "waited until the end of the movie before making his fatal move."
Posted by Sam at 7:09 AM