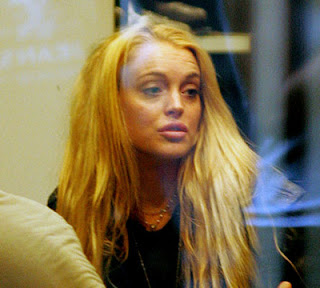 Cracked out Lindsey Lohan got into trouble again??

Figure her probation will at last be revoked?

The charge, which will be filed Wednesday, brings the troubled star another step closer to returning to jail. She is due in court for an arraignment on that afternoon.

Los Angeles police said Feb. 2 that Lohan was under investigation for taking a necklace from a Venice store later identified as Kamofie and Co. Detectives obtained a search warrant to try to retrieve the item from Lohan’s home, but it was turned into a police station before any search was made.

A phone message to Lohan’s attorney, Shawn Chapman Holley, was not immediately returned.

The 24-year-old remains on probation for a 2007 drunken driving case and a judge had threatened to throw her in jail if she ran into trouble again.
Posted by Sam at 5:53 PM