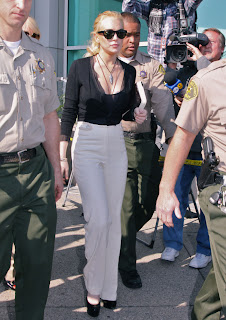 I'll believe it when I see it.

I also would have told her to wear something else to court.

LOS ANGELES (AP) - A judge on Wednesday gave Lindsay Lohan roughly two weeks to decide if she will fight or take a plea deal in a felony grand theft case, but either decision could send the troubled starlet back behind bars.

Superior Court Judge Keith Schwartz told Lohan he would sentence her to jail if she accepted a plea deal involving the theft of a $2,500 necklace from an upscale jewelry store.