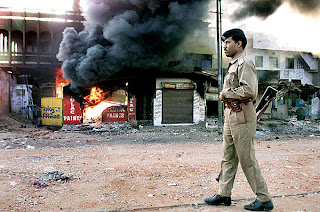 That must've been on heck of a trial.

The court in Ahmedabad, Gujarat, also acquitted 63 people of participating in the attack, following a trial that ended in September 2010, after lasting for nearly nine years.

Prerna Suri, Al Jazeera's correspondent New Delhi, said: "This has been a very long drawn out process, a few men have actually died in custody waiting for this verdict.

"It is expected that this verdict will be appealed. Families of the accused say they will take this to the Supreme Court and the Higher Court as well.

The train fire at Godhra station in the western state of Gujarat triggered some of the worst religious violence in India since independence.

Hindus blamed Muslims for the blaze, leading protesters to seek revenge by rampaging through Muslims neighbourhoods in three days of bloodshed.

Muslims have always denied setting the train ablaze. More than 1,000 people, most of them Muslim, were killed in the violence that engulfed the state until May of that year.