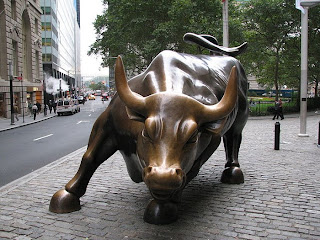 Do we still hang cattle rustlers?

Of course not.  Besides it was a cattle sculpture not a live bull.

So perhaps, since it was a sculpture, can we hang the rustler in effigy?

As long as ranchers have raised cattle in Texas, there've been thieves in the rustling business. But several weeks ago, cattle rustling took on a unique dimension when someone made off with a nearly one-ton bronze sculpture of a Brahma bull from a Bayview ranch.

Rio Grande Valley artist Rogelio Tijerina considers the life-size sculpture, dubbed “Process,” a signature piece because it inspired other work connecting the ranch life of his childhood to his vocation. The 1980s work represents a year of Tijerina's life — it took at least that long from the time he butchered the bull at his parents' farm in Pharr to its bronze casting in Chicago, where he taught at the time at the School of the Art Institute of Chicago.

When the theft occurred, the sculpture was sitting in a pasture of Tijerina's 140-acre ranch northeast of Brownsville. That's where he had parked it 10 years ago following a 15-year national tour. Tijerina, who splits his time between South Texas and Chicago, first became aware on Jan. 31 that the bull was missing. He filed a report with the Cameron County Sheriff's Department the same day, and the theft gained a higher profile this past weekend with a news story broadcast on KRGV-TV.