And as if on cue; you too can have your kid play a drug cartel thug..... 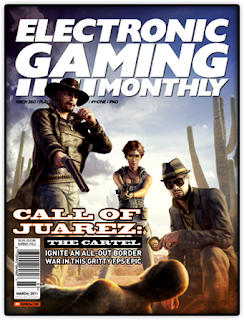 Innocent children and cops are being slaughtered but lets not let that get in the way of making some bucks off of it.

By Andy Chalk - Blue Water - Green Tree
Police in Texas are unhappy with Ubisoft's upcoming Call of Juarez: The Cartel, which they say glorifies drug-related violence in Mexico and could even help push teenagers into the lifestyle.

Not much is known about Ubisoft's plans for the next Call of Juarez game except that it will take the series out of its wild west roots and drop it into the modern day instead. But that's enough to earn it a thumbs-down from law enforcement in Texas, where the game's apparent tie-in to the ongoing cartel wars in Mexico seems to have struck a nerve.

"Unfortunately there are companies that are looking to capitalize on the violent situation in Mexico which has had a very negative impact on the country," Brownsville Police Chief Carlos Garcia told the Brownsville Herald. "There have been spillover cases in certain areas of our country with cases of kidnappings and murders. This is a serious topic and this is just another violent video game."