How about a food for Nukes program? 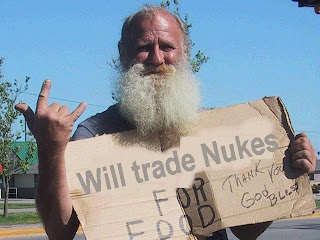 Why not say, Yes, North Korea we will give you food you give us all your nukes?

Also make sure the food we give gets to those who need it, i.e. not North Korea's military.

TOKYO - North Korea recently took the unusual step of begging for food handouts from the foreign governments it usually threatens.

Plagued by floods, an outbreak of a livestock disease and a brutal winter, the government ordered its embassies and diplomatic offices around the world to seek help.

The request has put the United States and other Western countries in the uncomfortable position of having to decide whether to ignore the pleas of a starving country or pump food into a corrupt distribution system that often gives food to those who need it least.